4:00 a.m. the community announcements start (If you want the people to get informed, there is no better time and way that reading 20 min of various announcements with a loudspeaker when everything is quiet)…

4:30 a.m. the roosters in the area start their wake up call one after the other…

7:00 a.m. the neighbor cooks right outside of my room, under my window….

That is the orchestra that got me ready for my days during my 2 months Social Sabbatical in Uganda.  I am here to support a local social organization called NIRP (Ndibwami Integrated Rescue Project) to redefine its strategic plan, working methods and to set up ways to impulse an organizational development.

To begin with, I want to mention that I am very thankful for coming here.  I have learned a lot (Particularly about myself) and this experience pointed me towards a slightly different direction than what I had expected. Nevertheless, I also have to admit that in some ways it was harder than I had anticipated.

All in all, I have a range of feelings about my time here. On one hand I have found great hearts, amazing courage to deal with really difficult situations and special cases of true solidarity. On the other, I had to repeatedly put up against absurd excuses and preposterous explanations that support the oppression and underestimation of women and others that justify denying kids their childhood.  All these, is due mainly to a blind and unquestionable belief that the culture so dictates it and that God himself has given his blessing for it in the bible.

I do not intent to tell you if things are right/wrong, correct/incorrect, because being fair, sometimes it depends with what they are compared to and/or in which context they are set, but also some others (many other times) it does not! 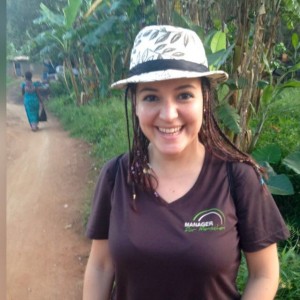 I arrived in Masaka, Uganda on the 2nd of December to find something that was not exactly matching the pictures I had neither in mind nor in the emails, but thankfully this package also unexpectedly included lots of little neighboring kids, which have been a real highlight. With them, I remembered how to jump the rope (and even make one out of a banana leaf), run around chasing each other while avoiding falling in the very bad dirt roads, discovered that people play similar games in Mexico (Specially “Avioncito”) and even learned local games and dances. It is an amazing feeling to come home after a long day in the office and being welcomed by lot of hugs, little voices screaming  “Jesca, Jesca”” and the best is when they knock on my door to ask if I will come out to play. They were also the stars in my bday party. However, let me tell you a little bit of what it means to be a kid here.

“I must have many children to prove that I am Man enough and if they die or have a miserable life is their own luck, because every child brings its own luck”, “I did not go to school and look at me, I have 9 kids and 3 wives, so my children do not need to go to school and who says that one simple meal a day is not enough for them?”,  “You must produce children!”, “Children have to be caned, otherwise how can you educate them”, “Children need to be tamed”,  “The children belong to the father”, “If a child is not good is because there is something wrong with the mother”, “Children are just smaller adults”, “My small daughters are lucky, because if I can’t feed them anymore, I will give them in marriage and I even get a dowry for them”.

Those are just a few quotes of what I have been told about children. Here a woman does not give birth, she produces children.  In the majority of the cases, the fact that children deserve to have a childhood is nonexistent. In a way, kids are as responsible for the well-being of the family as the adults. They cook, work, hand wash the family clothes and clean as early as when they are 5 years old. Being little does not stop you from taking care of one even smaller than you; so very often 3-4 year olds are caring 1-2 year olds on their backs.  Interestingly, this happens not only between siblings, but also among the kids of the community or neighborhood.

Since they are so many, from all ages, going through the same at the same time, they grow very close together. Therefore, the kids look after each other as if they were a big family. A mother can without a problem give instructions to some else’s kid and the child will obey.  If a baby cries, any of the kids around will pick him/her up. Nice is also when you give something to one, it’s automatic that it will be shared among all. Unfortunately, the great majority of adults do not cherish any this. 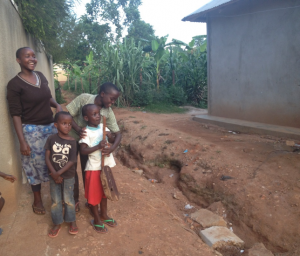 I had the opportunity to do several home visits in close by, but also very, very remote communities. We targeted vulnerable children. The stories are numerous: single mothers that ran away from strong domestic violence, grandmothers that are left to look after their orphan grandchildren and support up to 6 kids on their own, child headed “homes”, whose parents had died or simply abandon them.

There is a man who lives with 6 of his 9 children in a very isolated, tiny one- room mud house with no electricity, no water, no toilet, no beds, no nothing. He does not know how old his kids are (I estimate that they range between 3 to 10 years old), they have never been to school, they are afraid of people, they work from sunrise to sunset in the field, sleep on the floor, do not shower (“why should they? they will anyways get dirty again”; said the father), are almost naked, visibly malnourish (they only get one meal a day: plain posho most of the time) and they show clear signs of having worms. Despite all these, the man has kicked out the mother of the kids and has a new “wife”, who doesn’t have nor feel any responsibility over the children. Additionally, he proudly said that he is planning to produce more children. He has to prove that he is man enough and one has to keep producing because maybe the last kid is the good one.

In another case, the parents of 5 were always fighting, so one day the father left. The mother then did not want to be responsible for “his” kids, so she also left. In that tiny mud house, without electricity, no water, no toilet, the 5 kids were left alone. The smallest was 2 at that time. They are not sure how long it took until someone noticed the situation and went to another far village to get the grandmother. She left her house and moved in with the kids, who she can only provide with a once a day meal and some kind of care. One kid died, one boy has an untreated serious disease on his foot, the oldest girl (14) recently got a baby (not married) and none of them have been to school; because they must help the grandmother with the work and there is no money for that type of luxury. It’s been 6 years since the parents left; no one has heard of them again, the “house” is in truly bad conditions (About to fall on them any moment) and the grandmother is sick and getting too old.

These kids are kept alive only to work and/or as a sign of how big someone else’s ego/virility is, while not being exposed to any type of education, interaction, care or love. 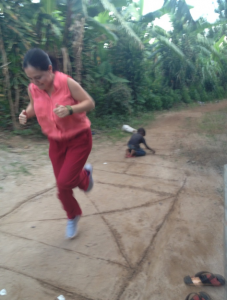 As a response to the findings, the organization is launching a sponsorship program. This will be closely conducted by the hardworking and big hearted social worker of the organization. The goal is to identify vulnerable kids (We have already 15), to support them to attend and stay in school; it is AMAIZING how much can be done with so little.

If the conditions demand it, the kid could also be allocated to a boarding school (System that is quite popular in Uganda). The program aims to have a holistic approach, in which the kid and his/her main care taker will also receive systematic psychosocial counseling and if appropriate, the main care taker will be coached and supported in her/his main income generating activity; as to provide the child and siblings with the basics of life in a dignified manner.

So, do kids bring their own luck?