The smart phone was ringing. It was 4:30 a.m. and it was still dark outside but the chirping birds couldn’t be ignored. They were welcoming the new day. It was time to get up. These days it was all about Rugby, a very important sport in New Zealand like soccer in Germany. The radio program has been dominated by Rugby, at least for days, if not even for weeks. The day might become amazing for New Zealand. It was still Saturday in Europe but already Sunday in New Zealand. The Rugby World Cup Final 2015 was going to be played between New Zealand and Australia in England.

Not quite awake my host family and I took the car, arriving at the pub still in time. The pub was already crowded and we were lucky, having reserved a table in advance. It took me some effort to find my way on crutches through the crowd to our table. Probably, most of the young people have stayed awake the whole night looking forward to the final. There were even some Germans around. At 5:00 o’clock the final started on time. Every attack of the All Blacks, the New Zealand team, was accompanied by great applause, screaming whistles and noisy clapping. After the first half the All Blacks were far ahead but the game was still open. The turning point didn’t come until a few minutes before the game time was over when the All Black got the crucial 7 points through a try and the following conversion. The atmosphere was breathtaking.

People were hugging each other and stood up, clapping and noisily cheering. What an amazing result. New Zealand, the first team with three rugby world cup victories and even twice in a row. Congratulation, New Zealand.

The rugby rules are a little bit strange. Both teams have 15 players. The goal is to put the ball behind the opposite line. If your team has the ball you can run forward. The opposite team will tackle you to prevent you from getting behind the line. You can pass the ball to one of your team members but only backwards never forward. If you succeed in getting the ball behind the line then your team will immediately get 5 points and a further chance of an additional 2 points. For the additional two points the ball must be kicked from a specific point through the goal posts which means it is something like a goal  in a soccer game. 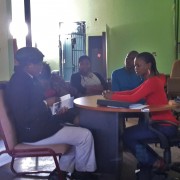 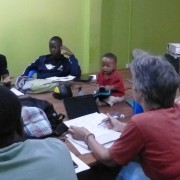 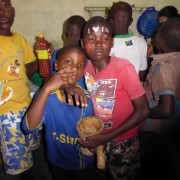 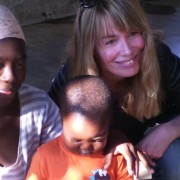